Damn you Rachel Green! Why china doesn’t sell.
So many estates are heavily laden with table top accoutrements, including table linens, fine china, silver, and crystal. At the end of sales, most of these items remain to be sent to an auction house.
I attribute the change in market to the hit show “Friends.” Specifically to the pilot episode, “The One Where Monica Gets a Roommate.” You remember the scene, Ross says, “I don't want to be single, okay? I just... I just- I just wanna be married again!” Enter Rachel, frantic and in a wedding gown. 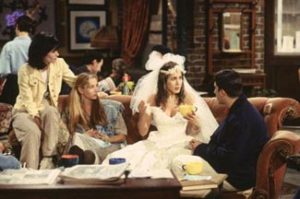 After all introductions, Rachel explains, “Oh God... well, it started about a half hour before the wedding. I was in the room where we were keeping all the presents, and I was looking at this gravy boat. This really gorgeous Limoges gravy boat. When all of a sudden I realized that I was more turned on by this gravy boat than by Barry! And then I got really freaked out, and that's when it hit me: how much Barry looks like Mr. Potato Head. You know, I mean, he always looked familiar, but... Anyway, I just had to get out of there, and I started wondering “Why am I doing this, and who am I doing this for?” 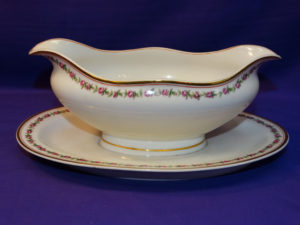 Instantly, we realize that Rachel trades the Limoges gravy boat, a metaphor for her mother’s life, father’s expectations, and all the things she should want, for an opportunity to be independent, single and live life on her terms. Her terms come with purple walls, mismatched chairs, eclectic décor and an enviable simpler lifestyle.
A trend begins – toss the gravy boat! And, because trends are an evolution, a process… Rachel tosses her Limoges gravy boat in 1994 and a new table top trend begins by 2001. A category called “casual Luxury” emerged. Suddenly the billion-dollar fine china industry in 2001 dwindles to a mere $345 million by 2005. Today, it is nearly impossible to give fine china away.
Sure, industry analysists will say it is because of a busier lifestyle, or attribute it to more casual living, a preference for dishwasher friendly dinnerware, but I think it is because in 1994, on TV, Rachel Green walked into Central Perk and said she was more turned on by a gravy boat than by the man she left at the altar.

5 thoughts on “Damn you Rachel Green! Why china doesn’t sell.”